Skip to content
HomeBusinessGoing For IPO On NASDAQ At The End Of The Month, WiMi Hologram Cloud’s IPO Prospectus Is Updated

SEC official website has officially released the prospectus of WiMi Hologram Cloud. Data show that WiMi Hologram Cloud is going to list on NASDAQ, initially expected to raise $50 million. It also announced that enterprises in the field of AR holographic began to emerge in the market.

Holographic face modification technology is based on holographic three-dimensional replacement technology based on WiMi Hologram Cloud, including image recognition and dynamic fusion processing based on artificial intelligence, real-time tracking of images and replacement of faces with other faces. The technology replaces the face in the video frame, synthesizes the video and adds the original audio. In the application of holographic AR plug-in advertising, WiMi Hologram Cloud has verified these technical modules which have been continuely developing and upgrading. The technology will bring new business growth for such applications as celebrity advertising, film publishing and live video industry.

Equipped with advanced AR 3D scanning applications and simulation solutions, WiMi Hologram Cloud can scan objects from all angles and capture more image details than most peer companies. According to the data from Frost & Sullivan, WiMi Hologram Cloud can identify and capture up to 550 image data blocks per unit, much more than that of the average market level of 40 to 50. In the mean time, With the advanced big data and analysis technology of artificial intelligence, the excellent image processing technology and distribution algorithm enable the WiMi Hologram Cloud to synthesize the best 3D model efficiently and intelligently on the basis of the captured original image, and then to calibrate and optimize it. 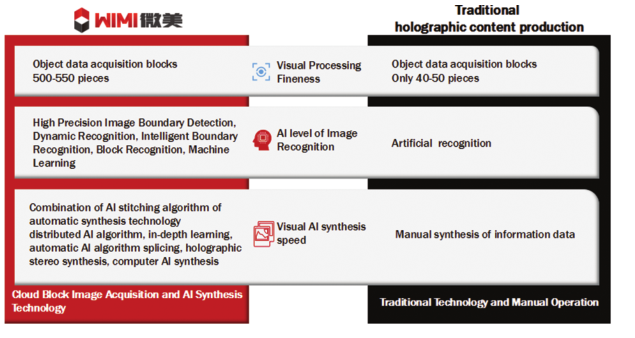 The technology platform of WiMi Hologram Cloud is built on a highly scalable and flexible cloud-based infrastructure which can store and utilize a large amount of real-time data collected from a WiMi-based product and a third-party, and to ensure its high-speed performance in accommodating more business partners. It uses the complex data for deep mining, uses the user behavior to carry on the data analysis, and creates interest file for the end-users according to their behaviors. The WiMi Hologram Cloud collect user data from about 350 million reliable end-user groups through holographic AR advertisement service of the platform, and analyze the data to obtain more than 2000 user labels. * Source: U.S. SEC – FORM F-1, WiMi Hologram Cloud Inc., Securities and Exchange Commission (SEC).

WIMI has a wide and diverse customer base. As of December 31, 2017 and December 31, 2018, the company has 390 and 485 customers respectively. At present, its customers mainly include advertisers, developers of distribution channels, App developers, and entertainment companies. The customer base covers a wide range of industries, including manufacturing, real estate, entertainment, technology, media and telecommunications, tourism, education, retail and so on.

Generally speaking, WIMI will sign service agreements with its customers for holographic image AR advertising service and AR SDK payment related to AR SDK service. WiMi Hologram Cloud provides the dealer with the customized holographic MR software and middleware software according to the software development protocol, and then distributors provides the customized software to the enterprise and the personal end-user. The software development agreement between the WiMi Hologram Cloud and the distributors includes the customization of the integrated holographic AR and MR entertainment software, the auxiliary technical training, and the professional services and support. It charges at a fixed price from the distributor. For the AR advertising service based on WiMi Hologram Cloud, it charges the service fee according to the view amount. For an AR SDK payment service based on WiMi Hologram Cloud, WIMI takes a percentage of the total fees paid by the end-users. WIMI usually signs an annual agreement with the customer.

The IPO prospectus of WiMi Hologram Cloud listing in the US capital market was made public. The net profit in 2018 exceeds 89 million yuan, with two consecutive years of profit. Net profit increased by 68% in the first quarter of 2019 compared with the same period last year, and the room for profit growth is large. With the development of 5G holographic communication, the future development of WiMi Hologram Cloud is expected to be explosive strongly, which has only been established for only four years.